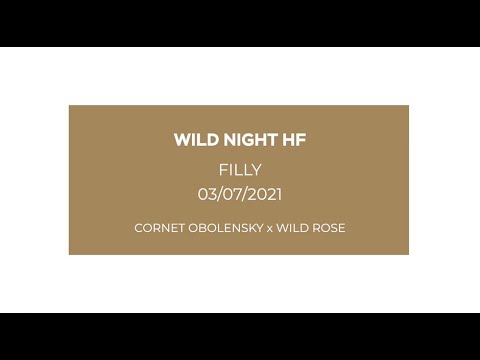 The dam of Wild Night HF is the prolific former ride of both Michael Whitaker and Emily Ward, Wild Rose is a consistent performer in Nations Cups and the highest levels of the sport.

With an international record to 1.60m, she is uterine sister to many successful equine athletes, such as; U.S based Drop Shot -the former ride of Ben Maher, 1.60 jumper Unex Arantos, Giga Dance - currently based with Ben Maher Stables, and Tim Stockdale's top mare, Victoria.
Wild Star HF, the first offspring of Wild Rose HF, was one of the leading 6 year olds in Spain this winter and is proving to be one to watch for the top of the sport. Furthermore, Wild One HF, the 4 year old full sister to Wild Night HF, is already showing the rideability and athletic promise, that Wild Rose and Wild Star possess.

This stunning filly is sired by the legendary Cornet Obolensky, who is arguably one of the World’s most successful sires. Also a leading competitor, Cornet started his world Cup career in 2008 with Marco Kutscher. The pair went on to become members of the German Nations Cup winning team at Rotterdam***** where they also placed 2nd in the Grand Prix. As a nine-year-old, Cornet Obolensky was the youngest member of the German showjumping team at the Beijing Games. In 2012, he was a member of the winning Nations Cup teams at Rotterdam and Rome, won the Grand Prix of Zurich***** and placed at most of Europe’s top competitions