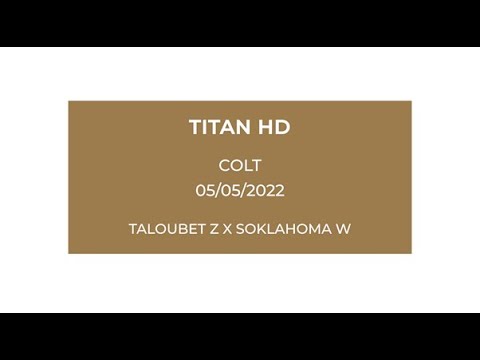 Eye catching colt by one of the worlds most successful stallions Taloubet Z out of the mother to Million Dollar Grand Prix winner Woklahoma W. Titan is real head turner, a bright chestnut stallion with white markings in all the right places. Destined for success, his breeding is littered with 1.60m jumpers and Olympic horses on both sides, with his power and temperament this colt has it all.

Dam Soklahoma W (Calvados x Ramiro Z) from the ZOTTIE stamm which is full of prolific 1.60m jumpers. Soklahoma is daughter of the legendary Elottie W who produced several 1.60m jumpers and sister to Oklahoma II W who is mother of Vindicat W team gold medal winner at London Olympic’s 2012 with Peter Charles. Soklahoma oozes quality as do her offspring, with daughter Woklahoma W proving this, winner of the Million Dollar Grand Prix, 2 x American Games Gold Medalist and competed at the World Equestrian Games.

Taloubet Z is true modern sport horse fast and powerful, making him one of the best jumping horses in history with medals at Olympic, European and World Cup finals he has proven himself time and time again. This outstanding stallion produces modern day sport horses, passing on his exceptional power and sharp reflexes, his daughter Taloubetdarco K Z jumped alongside him at Rio Olympics for Japan, Take a Chance On Me Z ridden by Christian Ahlmann has been incredibly successful at 1.60m level to name just a couple.

There is far too much to write about Titan HD that words can’t do him justice, he really is not one to miss out on, an incredible opportunity to own something extra special.