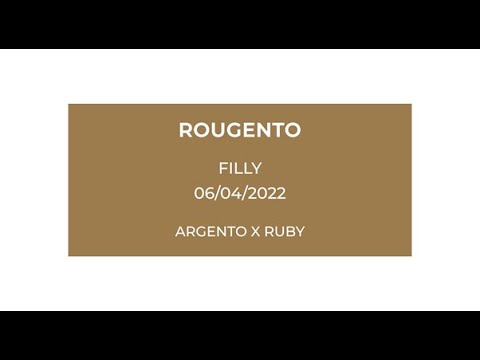 Sired by the great Balou Du Rouet, Ruby VIII is a consistent performer at the top level of the sport. With numerous international Grand Prix wins and placings to her name, she was second in Dublin Horse Show in 2019.

Ruby VIII is out of the superb international mare “Equity” (Indira) campaigned by Di Lampard, the pair recording a long list of wins up to 1.55 level at some of the most prestigious 5* shows around the world. Ruby herself has an impressive list of results, with 6 wins and 37 top 5 finishes at international competition in her career. With 3 yearlings already on the ground, Ruby VIII they look to have inherited her excellent attitude and conformation.

Since retiring to stud three years ago Ruby has been consistently producing superb quality foals, and this incredibly athletic Argento filly is no exception.

Before his retirement at the age of 18, Argento was the pride of British show jumping. During his 11-year partnership with Olympic silver medallist John Whitaker he won more than 16 Grand Prix including those of Hong Kong, Amsterdam, Munich and Saint Tropez. He already has a number of outstanding progeny on the ground, jumping to 1.60 level.