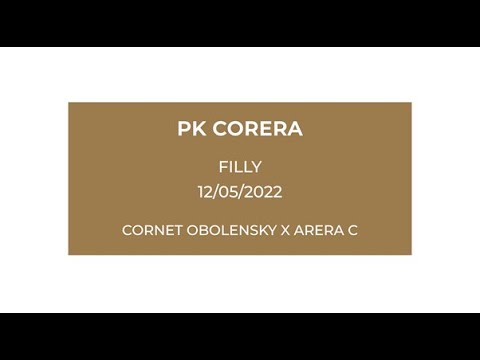 This filly boasts parents who were both incredibly successful at 1.60m level winning almost 1 million each!

Arera C had an illustrious career that lasted over 7 years, this daughter of Indoctro won over € 900.000. She won no less than 10 international classes, 7 at 5* level and 2 at 1.60m. She totalled a surreal number of 21 placings in 5* Grand Prix and World Cups across the globe. She won the Amsterdam Grand Prix and was 3rd with the Dutch team in Aachen. Her competitive mentality, that runs through the entire family, led her to a placing percentage of 47%, meaning that in nearly every 2nd class she entered, she was placed in the money! Arera C is known as being one of the best mares of her generation and offspring are highly sought-after all over the world!

Cornet Obolensky needs no introduction; he has dominated the sport and breeding world for over a decade. Phenomenally successful as both a sport and breeding stallion, he is still as popular for breeding today as he was at the height of his international career. His good looks, temperament and outstanding technique and scope, and that of his offspring, have seen him counted amongst the best stallions in the world for heritability and reliability. Today, his children and grand-children fly the Cornet Obolensky flag at the top level all over the globe. In 2012, the BWP awarded him the title "Ambassador", every year he is in the top 10 WBFSH stallion rankings.

Additional Information: Purchaser to take the mare. The mare and foal become the responsibility of the Purchaser at the fall of the hammer. Mare to be returned to Owner after weaning.