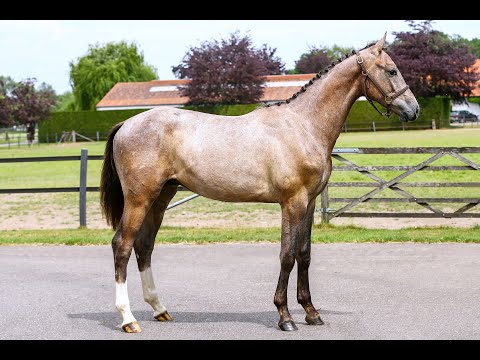 Sired by the Cornet Obolensky son Cape Coral RBF Z, Olympus is a promising yearling filly, with a natural talent over a fence. The sire, the striking Cape Coral RBF Z is making progress in both sport and breeding. His first breeding results are very promising, his oldest offspring show a lot of talent under saddle. This international 1m50 level jumping son of Cornet Obolensky shows the potential everything to develop into a Grand Prix showjumper.

In this pedigree the international 1m50 showjumper Cape Coral RBF Z is united with a successful Dutch damline, from which several international showjumpers already descend. Dam Cognac has performed on 1m35 level and has the valuable and influential Grand Prix stallions Verdi and Voltaire as sire and dam’s sire, which makes sure this colt Olympus has very good origins.

Exciting competition relations include 8yr old Hennessy, competing on the international circuit at 1.40 level under Ciaran Nallon, with Argelith Niels (Eva Bitter) and Perlchen (Alberto Zorzi) featuring in his pedigree.

N.B. This lot attracts VAT at the rate of 21%. VAT will not be charged if the animal is exported from The Netherlands.