Stunning Daughter of Emerald out of an ELITE dam 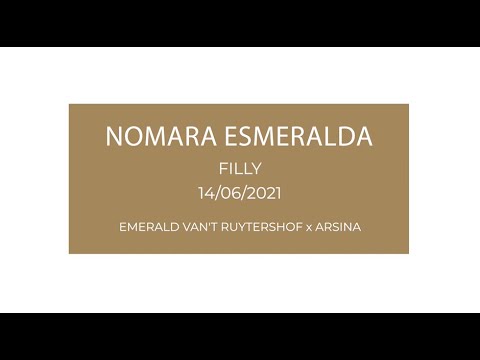 This pedigree is nothing but ELITE with the dam, Arsina, graded "Steer Preferent Prestatic"!

The mother, grandmother and the great grandmother of Nomara Esmeralda are all elite graded, making this quite an extortionary occasion.

Conformationally correct, a true proven black type pedigree that makes this filly a star of the future. The dam line is steeped in quality descending from the LANDGRAF line with several 1.60m jumpers, including uterine sister Wersina! Arsina is graded elite and has six international siblings including Gianni HC and Ersina performing at Grand Prix level. To top this Arsina herself has produced a 1.45m jumper Excel under Felipe María DE ZULETA !

Popular and proven, the stallion here is Emerald, who has had an extraordinary career under Dutch rider, Harri Smolders. Taking wins in the Nations Cup shows at Aachen and Gijon in 2013 and Falsterbo in 2015. He went to both the World Cup and the Olympic Games of 2016 and won the Nations Cup of Rotterdam in that same year. His enviable list of progeny include some of the most impressive showjumping horses currently on the circuit, among them –Igor, I’m Special De Muze, Kasper Van’t Hellehof and rising star at the very highest-level Escape Z.