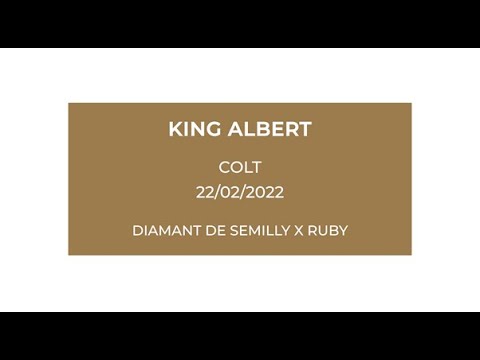 Sired by the great Balou Du Rouet, Ruby VIII is a consistent performer at the top level of the sport. With numerous international Grand Prix wins and placings to her name, she was second in Dublin Horse Show in 2019.

Ruby VIII is out of the superb international mare “Equity” (Indira) campaigned by Di Lampard, the pair recording a long list of wins up to 1.55 level at some of the most prestigious 5* shows around the world. Ruby herself has an impressive list of results, with 6 wins and 37 top 5 finishes at international competition in her career. With 3 yearlings already on the ground, Ruby VIII they look to have inherited her excellent attitude and conformation.

Since retiring to stud three years ago Ruby has been consistently producing superb quality foals, and this stunning Diamant colt is no exception.

Diamant De Semilly is another regarded as one of the world’s super sires. With a record to 1.60 under French rider Eris Levallois he collected team gold at the 2002 World Equestrian Games, team silver at the 2003 European Championships and was named French National Champion in 2002.  He also has 158 offspring jumping to 1.60 level and 321 approved sons. His most famous include Don VHP, Quickly de kriesker, Emerald and Tom McEwen’s Tokyo Olympic eventing ride, Toledo de Kerser.