Eye catching colt by sire of the moment Faltic HB. 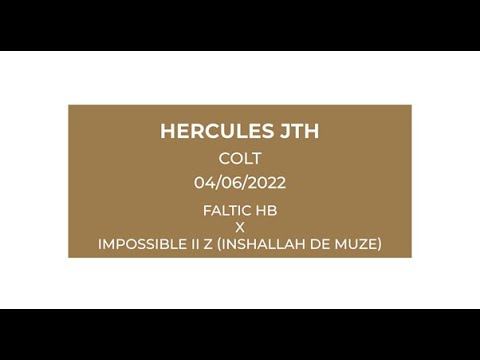 This stunning colt is by one of the most talked about sires of the moment, Faltic HB, a top son of Baltic VDL, is out of one of the best mother lines in Holland, with over 100 offspring jumping 1.50m and above. He was fully approved as a 4 year old by the AES, and his career has gone from strength to strength, now an important member of Ben Maher’s string, he has had numerous recent podium finishes in the GCL this season, together with strong World Cup and Nations Cup performances.

His dam, Impossible II Z has had a strong career up to 1.40m level, and is uterine sister to 1.60m performer G & C Sonny (AKA United III), who was ridden to Nations Cup level by Rodrigo Pessoa at the peak of his career.  She is also uterine sister to a number of additional International performers including 1.45m horse Alou.

This strong short coupled colt is a real head turner, and a great example of the modern scopey type that Faltic HB is producing consistently – a real star for the future!

Additional Information: Purchaser to take the real mare, the mare and foal become the responsibility of the Purchaser at the fall of the hammer.  Real mare not to be taken out of the UK by the Purchaser.  Additional agreement to be signed between Purchaser and real mare Owner