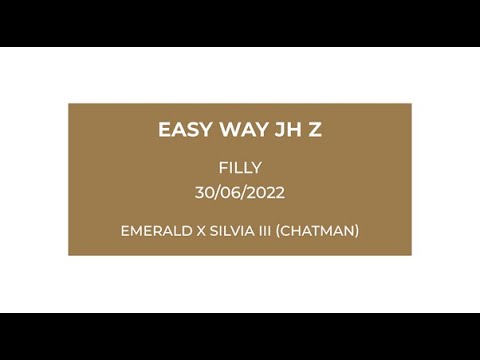 Silvia 111, the dam of this exclusive filly, is a 1,50 Grand Prix performer herself plus the mother of the 1,60 GP winner Shehanez from the old lodge stud, the paper of Silvia 111 can said to be one of the most promising broodmares of all time, she has 10 direct siblings that competed at 1,45 level and above 5 of which jumped the 1,60 GP level, the most famous of her siblings include to be none other than Winningmood who competed at the highest level with luciana diniz winning the biggest grand prixs in Aachen, Estoril GCT, Madrid, Hamburg, Paris and Brussels. Winningmood himself also bred some exceptional horses including Emily moffit’s Winning good.

Another half sibling to Silvia is the well known sire of Chippendale Z who bred GCT winner in Madrid and prague Vivaldi des Menelaux of Olivier Robert’s Other greats include British and Irish team horse Richi Rich of Guy Williams and David Simpson.

Popular and proven, the stallion here is Emerald, who had an extraordinary career under Dutch rider, Harrie Smolders. Taking wins in the Nations Cup shows at Aachen and Gijon in 2013 and Falsterbo in 2015. He went to both the World Cup and the Olympic Games of 2016 and won the Nations Cup of Rotterdam in that same year.

His enviable list of progeny include some of the most impressive show jumping horses currently on the circuit, among them – Igor, I’m Special De Muze, Kasper Van’t Hellehof and Escape Z (Emerald).