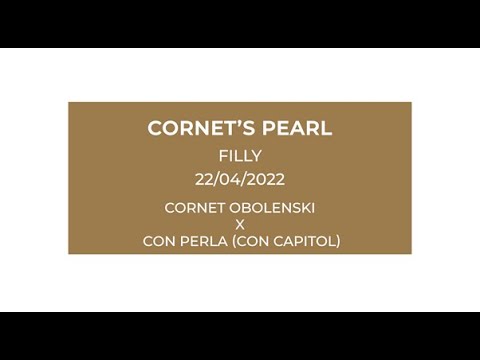 This filly combines the legendary Cornet Obolensky with the uterine sister of Daniel Deusser’s top ride Cornet D’Amour.  Cornet D’Amour was a special horse for Daniel really taking him back to the top of the sport, and a horse much envied on the circuit.  His major results speak for themselves with wins in the CSI 5* Grand Prix of Paris; wins in the Rolex grand Prixs of Hertogenbosch and Aachen, and a podium finish at the World Cup Final of Gothenburg in 2016.  Another uterine sibling Amarit D’Amour also performed at 1.55m level.

With dozens of his offspring already advancing to the highest levels of the sport, this filly’s sire Cornet Obolensky´s record and standing in the show jumping world are almost beyond compare. His results include multiple World Cup wins, team gold at the European Championships in 2011 and an Olympic appearance at the 2008 Beijing games.

His progeny is littered with some of the best-known names in show jumping including Cornado 1 and Comme Il Faut (Marcus Ehning), Cornet D’Amour (Daniel Deusser), Colestus (Marco Kutscher).

Sharing a sire in Cornet Obolensky with Cornet D’Amour makes this filly all the more special a prospect for the top sport.

Additional Information: Purchaser to take the mare, the mare and foal become the responsibility of the Purchaser at the fall of the hammer.  Recip mare not to be taken out of the UK by Purchaser.  To be returned to Owner’s designated address in France after weaning, Purchaser to pay up to £500 of transport costs to return recip mare, Owner to pay remainder.