Comme il faut colt out of Geena van’t Roosakker; producer of 2 x 1.60 horses and from the legendary Roosakker family! 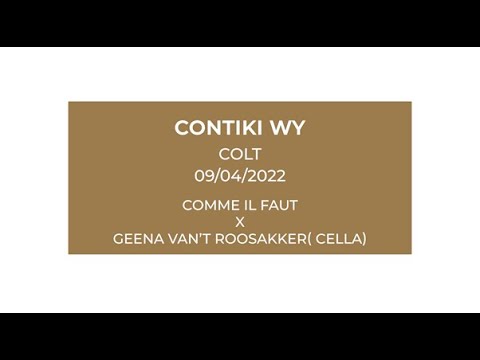 Contiki WY is a spectacular blood made colt from the prolific sire ‘Comme il Faut’ who made huge impressions at major championships under the saddle of Germanys Marcus Ehning. Comme il faut himself needs no introduction but perhaps even less so, do his parents. Sired by the legend Cornet Obolensky and out of Double Olympic Gold medal winner Ratina Z; Comme il faut’s quality speaks for itself.

Contiki WY’s mother is none less than Geena Van’t Roosakker. Geena is a direct daughter of the Grand Prix winning Babbe van ’t Roosakker (1.60m) who is sister to the 5* Grand Prix winning mare Cella (1.70) under the saddle of Ben Maher and a daughter of the unparalleled Usha van’t Roosakker who was again highly successful under Marlon Zanotelli. Geena is a sister to the stallion Erco van’t Roosakker (1.60) of Lorenzo de Luca, Bingo of Kristen Coe and Michel Hecart and Giorgio van’t Hagenhof of Quentin Judge and Khaled Al Eid. Another brother of Geena is the competitive 1.60m performer Dulhan de la Roque of Reynald Angot and Michel Hecart.

Geena herself was an extremely successful sport horse under Janika Sprunger and Hans Dieter Dreher coming 2nd in the Ascona Grand Prix. Geena ticks all the boxes, having competed at high level herself (1.55), descending from a proven family and having produced top 1.60m Grand Prix horses herself. She is the dam of Jivaro Imperio Egipcio of Francisco Musa and Kheros van het Hoogeinde of Rene Lopez regularly seen on the Global Champions Tour, both horses compete in 1.60m classes at 5* level. Geena is also the dam of Mystic van’t Hoogeinde, crowned World Champion in Zangersheide as a 6 year old!

Rarely is there an opportunity to acquire a colt from such an incredible damline in such an extremely modern colt as Contiki WY.

Additional Information: Purchaser to take the mare, the mare and foal become the responsibility of the Purchaser at the fall of the hammer.  Recip mare not to be taken out of the UK by Purchaser.  To be returned to Owner’s designated address in Belgium after weaning, Purchaser to pay up to £500 of transport costs to return recip mare, Owner to pay remainder