Conthargos Filly From a Top 1.60 Mother 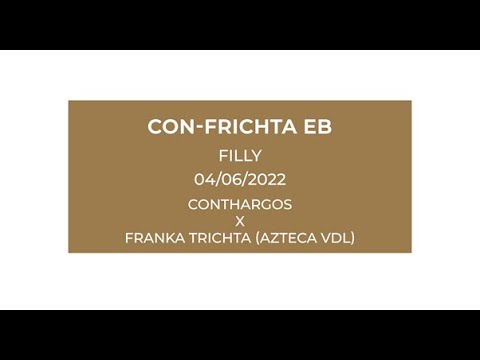 This striking filly like her mother is full of presence! Her dam Franka Trichta (Aztec VDL x Kojak) jumped successfully to 1.60 level herself all over the word with Mclain Ward (USA) and previously ridden to success by Michael Hughes (USA) and Joe Clayton (GBR)  before focusing on her breeding career. With two siblings also competing Internationally, she is set to be a much sought after broodmare.

Conthargos is a prolific sire, in fact one of the most popular in Europe at this time, with a list of progenies that decorates the winners lists at the very top of the sport, including Ben Maher’s Nation’s Cup winning ride and 1.65 performer, Concona, Conchento PS (Luciana Diniz), and Cosa Nostra who jumped the Tokyo Olympics with Alberto Michan! With an incredible strike rate for producing offspring at this level and many more following close behind, it’s easy to see why this stallion has become one of show jumping's most notable.

This filly is the first foal from this outstanding mare Franka Trichta and with a sire like Conthargos gives her 1.60 horses on both sides of her pedigree.  She is sure to be a valuable asset both with an exciting career ahead as a Sporthorse but also a breeding prospect – a future Champion through and through!

Additional Information: Owner to take the real mare, both mare and foal will stay in the ownership and care of the Owner until weaning.