Out of the Sister of RMF Echo, Already Half Brother to Two 1.45m Horses 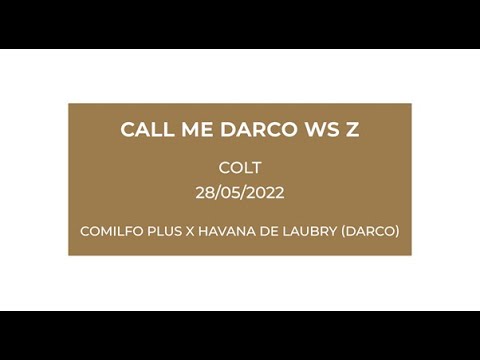 This colt is out of Havana de Laubry, a Darco mare that has already proven herself as a top dam having produced both Zadora de Laubry and Enzo de Laubry competing at 1.45m Grand Prix level.  She is also uterine sister to three 1.60m performers; RMF Echo the CSI 5* ride of both Denis Lynch and latterly William Whitaker, who consistently scored podium places in both GCTs and CSI 5* Grand Prixs around the world; Viking D, the former ride of Aniek Poels, and latterly Qatar’s Nasser Al Ghazali; and finally Cleopatra VI, the CSI 5* ride of Monika Martini.

Her pedigree is full of top performers, with another full brother Idefix jumping at 1.50m level, and Sea Coast Pebbles a daughter of one of her sisters jumping 1.65m, with 1.60m performers Aristo Z ad Vicomte D also being close relations.

Comilfo Plus Z is a modern son of Comme Il Faut, with extraordinary scope, explosive power, perfect technique, and easy rideability. He is light on the ground, quick in the air, and is a compact model.  He started his career under Christian Ahlmann, finishing 5th at the World Championships as a six-year-old. He then competed under Judy-Ann Melchoir, before returning to Christian, who was campaigning him successfully at 1.45m before an injury finished his sporting career.

Comilfo's first crop were very impressive at the 4-year-old championships in 2017, and are proving to be copies of their sire, with his good conformation and technique. He already has two licensed sons, Copycat Z and Chapeau PS Z.  This colt is no exception showing the sheer quality and depth of heritage that is reflected on both sides of his pedigree.

Additional Information: Owner to take the real mare, both mare and foal will stay in the ownership and care of the Owner until weaning