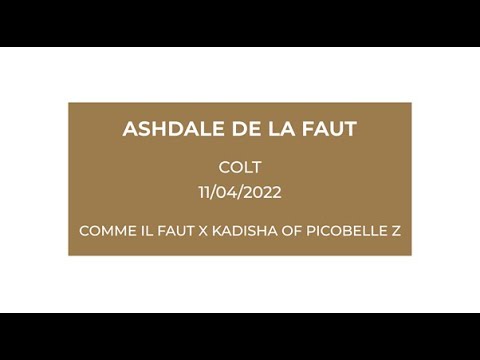 Ashdale de la faut has all the Pedigree for a top sports horse in the making.

The Dam is a young dam with Kannan and Indoctro as the Blood lines has all you need towards a perfect pedigree with the depth of damline to match, and is currently being produced for the International Young Horse circuit in Holland.

Grand dam is Mabella-Picobello who is Competing Internationally in the Sport with Guillaume Ruant of Belgium.

Mabella’s full sister is the famous Hello M’Lady, who needs no introduction as she has competed all over the world with Scott Brash.  Her winning results include the CSI 5* Grand Prix at Verona, GCT 5* GP at Mexico City, Monte Carlo & Paris, and the London Olympia World Cup to name a few highlights.

His sire Comme il faut is one of the greatest sport horses of all time, coming from Cornet Obolensky and Ratina Z his genes and genetics are second to none, with Marcus Ehning he won the biggest Grand Prix in the world, and was a regular team member for Germany including a European championships, he won major grand prixs such as GCT Vienna and GCT Chantilly he also won World Cups in Verona and Madrid.

Some would say his sport career was magnificent but his breeding career is extraordinary his oldest offspring are still new to the highest level but they are already showing themselves to be the best, producing great horses such as Checker (Christian kukuk) Caramba (Richard Vogel) Comme-laude W (Bart bles) Faut des 7 vallons (Gregory Wathelet) chic chic (darragh Kenny) chao lee (katrin eckermann).  His track record includes over 80 approved sons and over 40 offspring jumping 1.60m Internationally to date.

Ashdale de la Faut really does have all the credentials to be one to watch for the top sport!

Additional Information : Purchaser to take the mare, the mare and foal become the responsibility of the Purchaser at the fall of the hammer.  Recip mare not to be taken out of the UK by Purchaser, to be returned to Owner at UK address after weaning